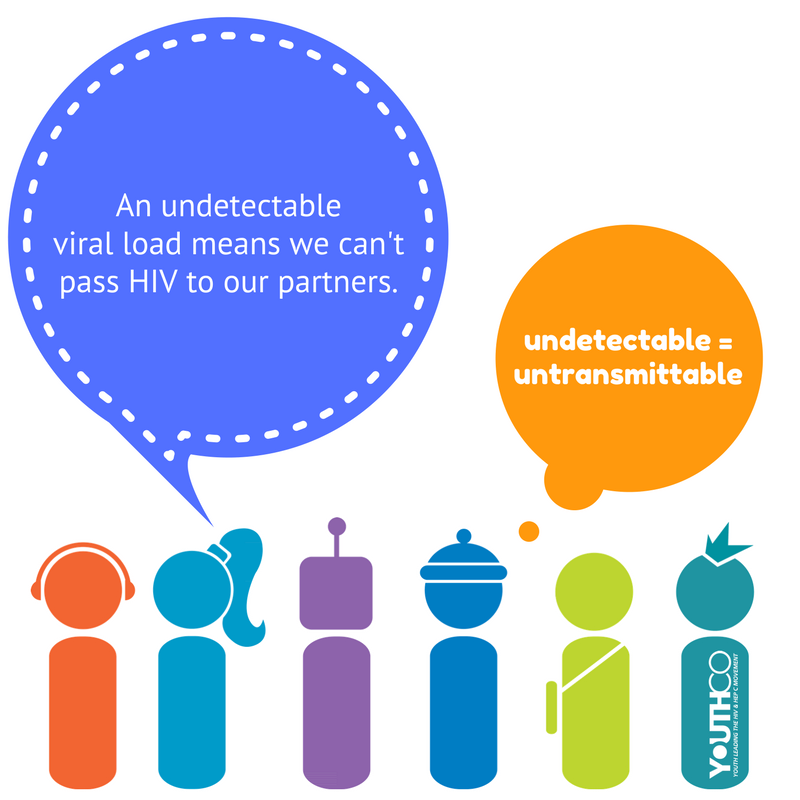 The science is in: those of us who have an undetectable viral load cannot pass HIV to our sex partners.

This is amazing news for our community and adds another option to what we can do to prevent passing HIV. In order to share this science far and wide, the Prevention Access Campaign launched the campaign, “undetectable=untransmittable” or “UequalsU” in 2016. This groundbreaking campaign brings the most up-to-date research about viral load and HIV to those of us who aren’t reading the latest medical journals with our morning coffee. Many notable doctors and researchers (in British Columbia and worldwide) and some of the leading HIV organizations (such as Terrence Higgins Trust and CATIE) have gotten behind this campaign first led by people living with HIV.

At YouthCO, we’re really excited about UequalsU. To fully understand the message, we’re going to break it down piece by piece:

What the UequalsU campaign focuses on is the fact that if our viral load is consistently undetectable for 6 months, we continue to take our HIV medications, and we get tested and treated for STIs as needed, we can’t pass HIV to our sexual partners. This information means those of us living with HIV who have a viral load under 200 copies can know that when we are having sex, we can’t pass HIV to our partners, and can confidently share this information.

For those of us living with HIV, whether or not we have an undetectable viral load, there are a number of options we can use to avoid passing HIV onto our sex partners. Condoms (external or internal) prevent HIV, STIs, and pregnancy, our HIV-negative partners can use medications to prevent becoming HIV-positive, and we can choose kinds of sex that don’t or are less likely to pass HIV. Since HIV first impacted our communities, we have seen that those of us living with HIV do a lot to prevent passing the virus to our partners.

At YouthCO, we are excited about the UequalsU message and are committed to sharing this information with our communities. We have already been sharing information about viral load as part of our HIV 101 workshops and will continue to incorporate this knowledge into all of our programs in culturally appropriate ways. We also look forward to updating our HIV 101 resource, Gearing Up To Get Down, to include this information. We are also exploring hosting an online discussion about this topic for youth living with HIV. Stay tuned to our social media for your opportunity to connect with this message, whether in-person or online.

We’re also working to share this message in a way that recognizes the reality that many of us as youth don’t have an undetectable viral load. In fact, compared to other age groups in British Columbia, youth living with HIV have the lowest rates of undetectable viral loads. There are a lot of explanations for this fact, and through what we do every day at YouthCO, we’re working to shift the stigma and oppression that is often part of this equation.

We believe stigma has no place in our response to HIV, whether in conversations we’re having with each other, sexual health information provided in workshops, websites, or brochures, or services for people living with HIV. We are grateful that we get to work towards this becoming a reality every day, and are excited to see where the UequalsU campaign will go in helping to stop stigma and build communities that know the truth about HIV.